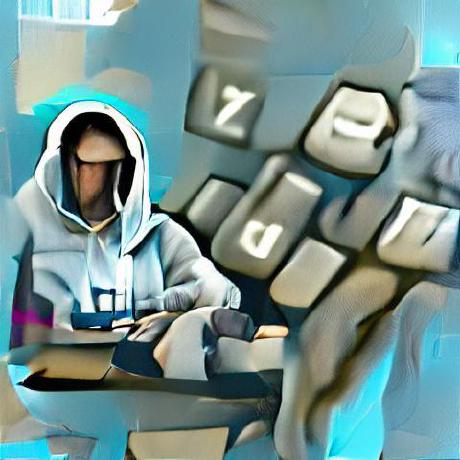 Agents within the simulation constantly loose energy over time, as moving around in the environment causes energy to be burned. The only way energy levels can be increased is via consumption.

If an agents energy drops below a threshold, death occurs. In contrast, passing above a another threshold causes the agent to split into two copies of itself (asexual reproduction).

When an agent splits, it doesn't always make an exact copy of itself. Sometimes mutation occurs. This means that the genetic code (DNA) that dictates the agents behaviours is slightly modified.

These genetic traits are as follows:

Over time, only the most successful agents are able to pass on their DNA, causing the population of agents to slowly evolve.

The metabolic rate is the rate which an agent transforms stored energy into kinetic energy. This has both pros and cons. Being able to move around the environment faster allows agents to consume food faster, but also causes the agent to eat more frequently.

This trait dictates how far an agent can sense other entities. A larger vision range is generally beneficial. However, this trait has some minor downfalls, especially for herbivorous agents. For example: hypersensitivity to other agents causes fleeing from non-dangerous situations, which in turn results in reduced ability to consume.

Rebirth rate controls how much energy is stored within an agent before splitting (asexual reproduction) occurs. This is especially useful for agents with low metabolism, as it allows them to navigate the environment for a longer time without depleting their energy.

Agent's dietary preference influences what food source an agent will pursue and consume: living or non-living. For an ecosystem to be stable, the need for agents of both these groups is required.

Flocking is a behaviour in which agents form groups, or clusters, whilst navigating the map, forming "multicellular life". Paradoxically this offers both safety and vulnerability. By sharing information whilst flocking, a group increases it's memebers knowledge of other potential dangers or food. In contrast, if the group fails to avoid a potential danger the whole group suffers.

Whilst moving around the screen, agents speed up and down in a sinusoidal pattern, creating a "crawling" effect. The frequency of this movement is dictated by the wobble trait. Wobbling has both advantages and disadvantages, with a lower frequency resulting in longer periods of increased speed but also longer resting periods.

Ecosim provides a way to configure the mechanics of the simulation via editing the config.h file. The process of doing so is as follows:

This is entirely down to personal preference, however, most people will only be concerned with two sections of the configuration: The general agent settings, and the agent DNA settings.

In order to use the population/trait logger, change the LOGGER_ENABLE setting to 1, recompile, and run:

Note, python3 and matplotlib is required in order to plot logged data.